I’m thinking about an IVA. I’ve got 8k of credit card debt and overdrafts but I owe a lot of income tax and VAT. Probably a lot over 20k but I haven’t filled out any tax returns for years. Do I have to get the exact tax owed when applying for an IVA? I don’t think I can cope with all that.

I was self employed but I now have a job, not well paid. I’m now living with my parents and don’t even own a car, so should I just go bankrupt instead? 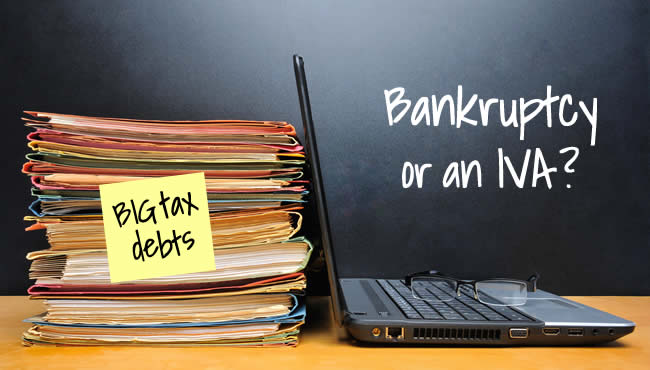 Would an IVA be approved?

An IVA firm will want the debts listed on the proposal to be as accurate as possible. That applies to all debts, but there are some important extra points when HMRC is a creditor

Before an IVA starts, it has to be approved by 75% of your creditors by value who vote on the IVA. If you think of all your creditors having one vote for every pound you owe them, then three-quarters of the votes cast have to be to accept your IVA proposal.

Because the reader owes so much to HMRC, they may well have a veto on his IVA proposal. HMRC is very likely to vote against any IVA proposal if there are any outstanding returns. So if the reader wants an IVA he has to submit his previous years’ tax returns beforehand.

Even if the tax returns are up to date so the figures in the IVA proposal are accurate, HMRC may still vote against it. An IVA firm should be able to say from their experience if HMRC is likely to accept the amount being offered. Sometimes HMRC will insist on the IVA being extended to six years, not five.

If HMRC is likely to object the reader may decide it’s not worth taking months to get his tax affairs in order only for the IVA to be rejected. It may be better (simpler, quicker) to go for bankruptcy.

Do the missing tax returns matter in bankruptcy?

The only problem for bankruptcy is that the Official Receiver may decide that the reader should get a Bankruptcy Restriction Order (BROs) because he has neglected his business, causing his tax debts to increase. This following type of wording is quite common on BROs:

Mr X failed to submit self assessment income tax returns on time between [date] and [date]. No payments were made by Mr X in respect of self assessment. HMRC are Mr X’s principal creditor and have submitted a claim in the bankruptcy of £n, which has materially contributed to his insolvency.

If the reader completed his tax returns before going bankrupt, that may reduce the likelihood of a BRO, but it would still be a possibility as the returns were late and he still wouldn’t have made any payments to them.

As the reader is not now self-employed, he may not care about a BRO because it will make little difference to him, see the restrictions involved in a BRO for details. A BRO will not increase the time he has to make monthly payments if he is one of the few people that has to pay an IPA (only 17.5% people did in 2017).

So IVA or bankruptcy?

Nothing the reader said suggests that an IVA is a better idea, but it’s always worth discussing the decision to go bankrupt in detail with an expert. For people with tax debts from self-employment, a good choice is to talk to Business Debtline to look at the possible options.

What if your business was still going?

If you want to carry on with your business, your situation would be very different from the reader’s case  This can change the decision between an IVA and bankruptcy, depending on things like whether your business may need any credit.

Here you have to get those back tax returns done and start keeping on top of the accounts from here on, whatever you decide to do about the debts. LITRG has some good pages on tax for the self-employed.

Of course the business has to be profitable when you are paying the correct taxes… If you are collecting VAT from your customers but not paying it to HMRC, it may look at first sight as though your business is doing well but it isn’t.