I have a debt with a default date 30 April 2013. I was paying the debt for about a year then stopped as the default would always be on my file in any case.

Will the debt drop off in 2019, or will it extend to 2020 as I was paying it for a year? Do settled accounts affect your credit score?

The simple answer is that all defaults drop off your credit record after six years, but this situation as it isn’t all good news for the reader. 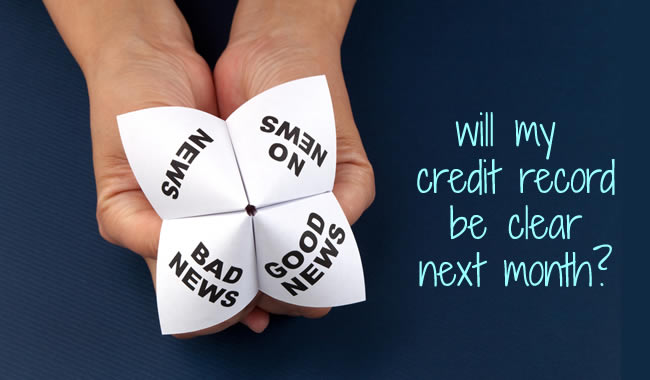 A debt will be deleted from your credit record six years after the default date. There are no exceptions to this rule so it applies if:

One point that can confuse people is that after a default has been added, another default is added each month. These don’t affect your credit score and don’t matter for when the debt drops off – the first default is the real one.

I’m not clear what the reader was asking, so I will answer some variations.

Will settling a debt once it has dropped off your credit score cause it to reappear at all?
No, it will never come back.

The bad news – a CCJ is still possible

As the above answer show, all the immediate news for the reader’s credit score is good.

The bad news is that even though the debt drops off his credit record, it still legally exists.

Because he last made a payment in 2014 sometime, it will not become statute barred until at least six years after he missed a payment to it which will be in 2020 – or possibly later.

Up until that point, the current creditor can take him to court and get a CCJ – that would then appear on his credit record for another six years even though the underlying debt is no longer there. It can be hard to be sure exactly when a particular debt becomes statute-barred as there was a new court judgement in January 2019 which affects some debts, see Common questions about statute barred debt for more information.

And this isn’t some theoretical possibility, it is unfortunately quite likely.

There were more than a million consumer CCJs in 2019. That was the highest number ever – more than twice as many as 8 years ago.

It is common for a debt collector to wait until the last 6 months before a debt becomes statute-barred before going to court. Read No calls or letters about a debt for years which looks at this situation. Should you get a loan to repay a default?