I have a Debt Management Plan where I still owe 17k to 10 creditors. I have been paying for ten years at £150 a month, so it will end in about 8 years. Most of the debts have gone from my credit record but a few are marked as “on a DMP”.

I want to pay off the debts and improve my credit rating. I have been offered about 7k by a relative, so I could offer all my DMP creditors around 40%. How would settlements affect my credit rating? Is it worth me finding out if the debts are actually enforceable?

I have already looked at offering settlements where the DMP had only been running a few years. And this Guide to F&Fs looks at the how to make a good full and final settlement offer to a creditor.

But this reader’s case is different: Are the debts enforceable?

It’s best to do this before you offer a settlement.

For credit cards, catalogues and most loans, the debt collector has to be able to supply you with a copy of your Consumer Credit Act agreement if you ask for it.  See How to ask for a CCA agreement, which looks at how to do this and when you should do it.  It doesn’t apply to overdrafts, utility or mobile bills.

How likely is this to work?

This reader’s accounts are at least ten years old. It is likely that at least some of his current creditors may be unable to produce the CCA agreement:

If it can’t be found

If the creditor can’t produce the CCA agreement for your debt, it is unenforceable.

I would allow the debt collector a couple of months before deciding that they aren’t going to be able to find it.  Three if you are feeling nervous.

The debt is still legal, it stays on your credit record and the creditor can ask you to pay it … but they can’t make you by taking you to court. The regulator says they have to explain this to you – they aren’t allowed to pretend you do have to pay it.

In this case you can simply stop paying the debt  – or tell your DMP firm to stop paying it, explaining why.

There is a small chance that the CCA agreement could be found later. This seems to be rare – if the debt collector hasn’t found in in the first few months the chances of it turning up later seem very low! To prevent that being a problem, and to stop the odd polite letter, you may decide to offer them a really low settlement amount, say 5%.

But if you want to offer this low amount to tidy up the loose end, then it is best to stop paying the debt first for a couple of months. Then the creditor will realise you are serious about not carrying on paying them. And then make your low offer. If they reject it, just say then you won’t be paying them anything.

This is why it’s worth asking for the CCA agreement before making a good settlement offer. By clearing out of the way any unenforceable debts you will have more money left to settle the others.

When the CCA agreement is produced

If you aren’t sure that what you have been sent is a proper CCA, read “How can you tell if it’s right” in the main article on CCAs.

If the creditor produces the CCA agreement, then the reader can just make the full and final settlement offer of 40% that was planned. That is a very good offer for a debt that old if only low payments are being made. He can help ensure the offer is accepted by:

The only downside to asking for a CCA agreement is that if the creditor finds it, they may then decide to go to court for a CCJ. But that would be pretty unusual if you are making them a good settlement offer!

Effect on your credit score

Settling debts doesn’t improve your credit rating.  People often don’t believe that, it sounds so odd. In practice settling the debts makes some lenders much more likely to give you more credit and it’s vital if you want a mortgage in the next few years. But that headline credit score number will not change.

Where a debt already has a default date, it is going to disappear 6 years after that date and making a full and final settlement offer won’t change that. In this readers case the debts have already gone – they will not reappear.

For debts with an arrangement to pay marker and no default date, settling the debts will mean they drop off 6 years after the settlement.

It is a pity all the debts weren’t defaulted originally – the reader should ask the original creditor (not the current debt collector that owns the debt) to add a default to the record back before it was sold.

If that is done – and some creditors do agree easily – that will remove the debt sooner and improve the credit rating. But do this after asking for the CCA agreement and sorting out the F&Fs – it’s too complicated to try to do this all at once. Do F&Fs make it harder to get a mortgage? 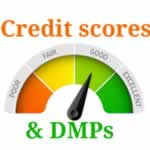 How does a DMP affect your credit score?

Do I have to pay a debt not on my credit file?