In 2016 the major UK banks all introduced new “basic bank accounts”. One of the main aims was to widen bank account access to groups of people who have found it difficult or impossible to open an account:

They all let you:

And the best bit is, if there isn’t enough money in your account to pay a direct debit or standing order, the payments won’t be made – so you can never go overdrawn – but you won’t be charged a fee for the DD rejection. Many people who have had big money problems know how much their bank’s overdraft fees and charges for DD rejections all contributed to the problem.

Who offers these new accounts

You should be able to open one of the following bank accounts if you have major problems on your credit record including being an undischarged bankrupt, in an IVA or a DRO, or having CCJs:

The only reasons you should be refused one of these accounts are if you could get a “normal” bank OR if there is a fraud marker on your account.

If you have an application turned down, ask the bank why – it has to give you a reason. If you have had any problems opening one of these accounts please let me know, for example by adding a comment at the bottom of this article.

My top pick is Nationwide

The Nationwide account has a contactless debit card, full mobile and online banking, text alerts and you can open it online.

If you already had a full current account with Nationwide before going bankrupt and you were not using your overdraft, they will normally offer to convert your account into a basic one. Here your sort code and account number stay the same and all your DDs and STOs stay in place , so it is hassle-free. 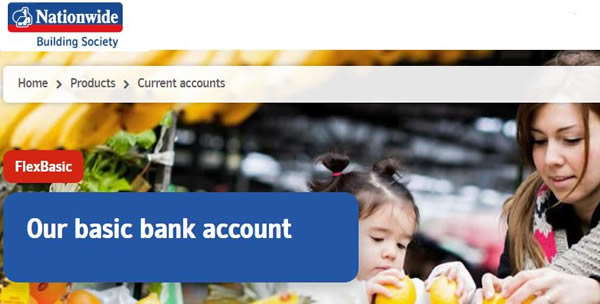 If you are having difficulty getting an application approved because of id issues, Nationwide, Barclays, Co-op and Virgin Money have a reputation for being helpful.

Two to avoid? Lloyds and Santander

From what I have been told, you can’t apply for a basic bank account with Lloyds directly – you have to go through the hassle of applying for a “normal” current account and then be rejected first. This is a very poor way to treat customers.

The problem with the Santander basic bank account is that the ATM card isn’t a chip & pin one, so you can’t use it in a shop. So they provide you with a “Visa top up” card which you have to pre-load with money from your basic bank account. This is a completely unnecessary faff – better to go to a bank which gives you a proper card debit card for the account.

Open a new account before or after you go bankrupt?

It may feel like a good idea to open one of the above basic bank accounts as part of your preparation for going bankrupt – this will allow you to get your salary and any benefits paid into the new account. If you want to do this two things are important:

You may just decide it is simpler to wait until your bankruptcy order has been made and then open a new account.

An alternative to think about – Monzo

I have seen some comments on internet forums saying that people with a Monzo current account opened before they went bankrupt were allowed to keep it afterwards.  This isn’t a “basic bank account” and so it doesn’t have the “no fees ever” assurance.

But if you want a modern bank with an app that helps you budget and makes it easy to put small amounts of money aside (I won’t mention the cool looking bank card) then you may want to give this one a try.

Making an “arrangement to pay” Concerns about starting a DMP